The Popularity of Maine Lobsters

Having landed in the menus of several famous restaurants worldwide, Maine Lobsters still continue to clamp in more ‘seafood taste aficionados’ to its side.

But Maine Lobsters were not always popular. In fact, its popularity saw a ‘boom-bust-boom’ rating since before the 1800s when it was still used by Native Americans as fertilizers and bait during fishing.

During colonial times, Maine Lobsters were actually disliked by many and considered “poverty food” for prisoners and indentured servants.

In Massachusetts, servants who rebelled disliked the lobsters so much, they negotiated that their contracts contain a stipulation against eating these lobsters more than three times a week.

In the early 1800s, lobstering was done by hand along the Maine shoreline. It was not until the 1850s that ingenious lobster traps were used to meet the growing demand for this seafood.

Maine Lobster’s popularity spread to New York and Boston as early as the 1820s when the Smackmen with their smack vessels, which had tanks and holes inside allowing seawater to circulate,  transported live lobsters over long distances.

But Maine Lobsters’ fame grew faster when they were canned by local cannery Burnham & Morrill Company in 1836 and then shipped to “all parts of the habitable globe” according to the 1880 history of Cumberland County, Maine.  When airplanes were invented, Maine Lobsters – whether canned or still-alive – are easily transported to be enjoyed even worldwide.

During World Wide II, Maine Lobsters were already considered a delicacy and were not rationed. It boosted its popularity as it was still affordable and filled-in the increasing demand for protein-rich food. In 1897, the Lobster Institute was created to assure the sustainability of both the lobster resource and its habitat through conservation, outreach, research and education.

But Maine Lobster’s fame suffered a bust immediately after WWII due to the dire economic situation at that time However, it exponentially rebounded prompting the creation of the Atlantic States Marine Fisheries Commission to impose state regulations. In 1950 and 1969, lobster consumption skyrocketed from .585 pounds in live weight to .999 pounds.

Maine Lobster industry popularity continued to increase that it became one of the most profitable fisheries in 1999 with a catch of 52,614,536 pounds bringing in P181.5 million in revenues. The number of lobstermen increased. They were now using bigger and more powerful boats.

But the University of Maine’s Lobster Institute and State Officials remain optimistic. They are now pursuing an “eco-label” seal from London-based Marine Stewardship Council hoping that it will open more doors to major markets worldwide for Maine Lobsters including major retailers such as Wal-Mart, Whole Foods, Target and Cosco among others that carry only seafoods with MSC seal that it is not overfished or were harvested in a way that harms the ocean. 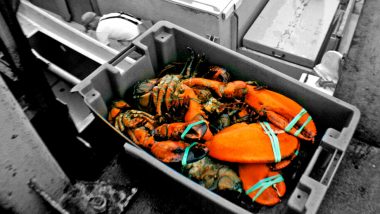 Maine Lobster Annual Festivals Shell-it out for the Community

Maine Lobster: An Amazing Seafood for an Amazing You!